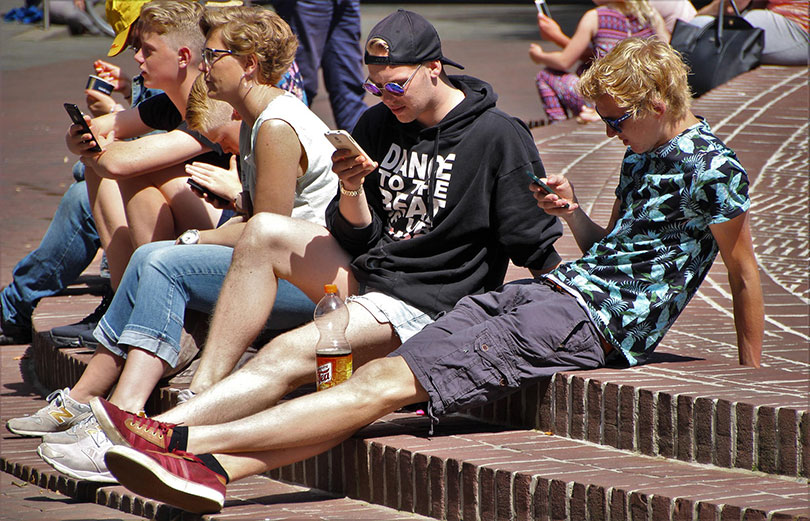 Gen Z is mobile-centric and unlikely to change. Smartphone use accounts for 62% of the young generation’s total screen time, compared to 41% of adults’ total time, according to an eMarketer report. Gen Z’s preference for smartphones over desktops/laptops is expected to grow as technology continues to advance.

+ Brands looking to connect with teens today needn’t look any further than the palm of their hands. As teens and young adults migrate away from TV and desktop computers, mobile advertising is the prime place to advertise. The best way to get their attention? Keep it real. Gen We responds to sincerity and depth. And be creative. They’ve seen it all.

Ten percent of tweeters dominate the Twitter-sphere. Most users rarely tweet. In fact, the most prolific 10% create 80% of tweets from adult users (PewInternet.org, 24 April 2019). That includes all types of tweets—original, retweets and quote tweets.

+ Most adult Twitter users in the U.S. post an average two tweets a month, favorite one tweet a month, follow 89 accounts and has 25 followers. The most vocal tweeters among U.S. adults are likely to be female (65% are women are among the most active, while 48 percent of less prolific users are women). So, if your Twitter Page has a few dominant voices and a load of laggards, that feels about right.

Gen We is redefining what it means to be creative. Gen We packs the creativity, and they’re using it to revolutionize everyday tasks like their scheduling, outfit choices and home décor. Their planners are becoming photo-ops of colorful, bullet-journaled pages, and their clothes are often DIY and upcycled. What’s the common factor in their newfound inventiveness? Gen We is re-defining what it means to be creative. And discovering their own identities in the process.

+ According to Gartner Iconoculture, Gen We says for kids their age, creativity is more of an important characteristic than being open-minded, possessing leadership skills, or having athletic ability. This may come as a shock to some; however, this may be because creativity adds an irreplaceable human stamp to one’s thoughts and work.

Marketing with Music 101. Have you ever watched a scary movie on mute? It’s not quite as scary anymore. Music is often used in TV and film to set the mood for a scene. The same thing can be said for marketing. The music that is paired with an advertisement can alter the way that the customer thinks about a product.

+ That being said, it’s important to know how to choose the right music and it is equally as important to make sure to avoid copyright lawsuits. While adding music to advertisements can be expensive, it does not have to be. There a variety of strategies that can be utilized to choose music that will be the most effective and ensure that it can be used legally.