Imagine being able to work in paradise for a year. Imagine finding that opportunity on social media. In 2013, Tourism Australia relaunched a previously successful campaign, The Best Jobs in the World, and made dreams come true for a handful of social media applicants.

The campaign offered six different and unique jobs across Australia. They ranged from ‘Chief Funster’ to ‘Outback Adventurer,’ and they all included some incredible perks. These opportunities pulled in tremendous amounts of attention and applications. And in the end, the campaign didn’t just provide dream opportunities. It increased awareness of and travel to Australia while gaining attention worldwide. 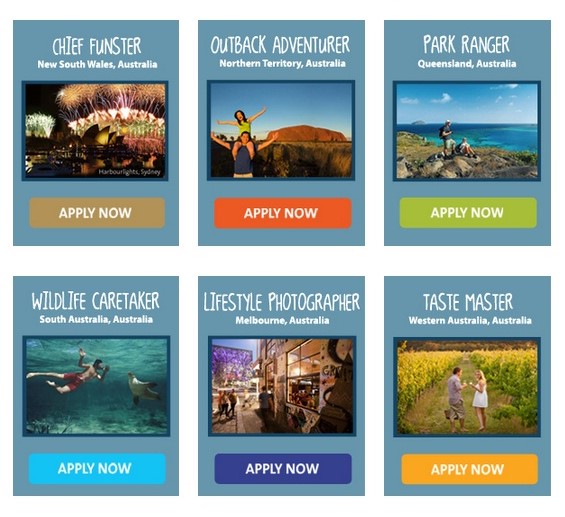 Social was a perfect platform to launch this campaign. Because this wasn’t like other jobs, it shouldn’t have been like other job listings. The opportunity leapt off the page thanks to beautiful visuals and fun language. It was succinct, yet sharable. And sharing is part of what made it a hit.

Applicants were also asked to use their social media creatively throughout the application steps. Things like creating and sharing a video, engaging with social pages, garnering interviews and more helped applicants stand out on their entries. Once the candidates were narrowed down, a group was brought to Australia to complete relevant challenges for their potential jobs and, after a week, the finalists were announced.

“The Best Jobs in the World” worked wonders for Tourism Australia. It was featured in over 8,500 articles around the world and generated $44 million of media coverage. More eyes on the posts meant more job applications and inquiries for the Australian Working Holiday visa and overall travel to Australia.

In total, the campaign received 620,000 applications from 196 countries, hired the six sought after candidates, and helped millions learn about the beauty and wonder Australia has to offer. We love that this campaign got people talking, sharing and planning their next Outback adventure.