Market estimates about U.S. women’s purchasing prowess varies, ranging anywhere from $5 trillion to $15 trillion annually. My 12-year-old son rarely has enough change in his pockets to cover a fun-sized candy bar. So why has the troubled retailer so wantonly abandoned women in its latest ad campaign?

The campaign kicked off in April with the video “Ship My Pants.” (Go ahead.  Say it out loud for full effect.) Featuring assorted shoppers professing that they had “shipped their pants” to promote Kmart’s Shop Your Way rewards program and its shipping feature, the video has garnered more than 17 million views on You Tube. The viral traffic is impressive, but will it drive store traffic? Doubtful. 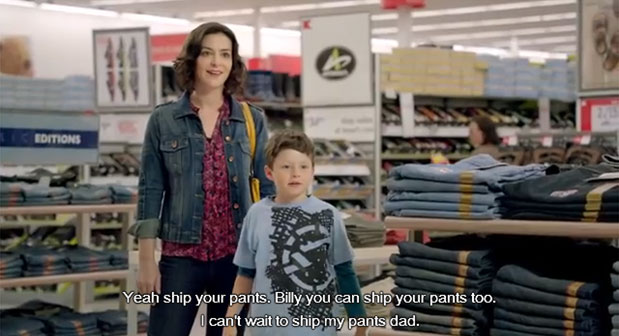 Kmart followed “Ship My Pants” with the radio commercial “Gas Problem,” a juvenile play on words to market Shop Your Way. The rewards program is a growing loyalty club that offers members benefits, including discounts at participating gas stations.

“If you’re like most people, you suffer from occasional gas problems that prevent you from doing the things you love,” the announcer states delicately, cuing up a series of people who confess to a family history of gas problems, missed dinners out and more. “My gas problem got so bad, I had to cancel a father son camping trip,” says a woeful parent.

Reportedly this is Kmart’s attempt to relate more to shoppers, but to what shoppers? Free shipping isn’t exactly a novel idea, nor are loyalty programs. So once the value proposition has been sifted out of the ads, all that’s left are bathroom jokes to hang the brand on. Not exactly chick magnet material.

Women are poised to control two-thirds of the consumer wealth in the U.S. over the next decade and be the beneficiaries of the largest transfer of wealth in our country’s history, according to Fleishman Hillard Inc. If Kmart wants share of the purse, it’s particularly important that its advertising and marketing resonate with her.

The first step toward creating brand loyalty is grabbing her attention; the second step is retention. The female brain is hard-wired with evolutionary strongholds to create a very specialized customer, according to Nielsen NeuroFocus research.  In other words, it takes a lot more than fart jokes and complimentary shipped shorts to make her take notice.

Women remember more and differently than men do, so talk to both her emotional and rational sides and acknowledge her careful attention to detail, suggests Nielsen NeuroFocus research. Appeal to her heart and her mind with a mix of emotional decision-making opportunities and rational information to increase purchase intent and bolster loyalty.

Finally, accentuate the positive. Eliminate the negative. According to Nielsen NeuroFocus, the female brain is programmed to maintain social harmony, so messaging should be positive and not focus on negative comparisons or associations.

Attention women: What’s your favorite ad campaign today and why? Download our free whitepaper: How women buy and what it means for your marketing plan.