Here’s a fascinating, female-driven development in the car world: features that prevent wrinkles (in skin, not clothes, though a car that magically keeps your clothes from crinkling would be a great feature, too, wouldn’t it?)

This new, cosmetically clever car is called the Honda Fit She’s (currently only available in Japan). According to this article, its windshield blocks 99 percent of ultraviolet rays, which can damage skin. The climate control system is called “Plasmacluster” and it’s mysteriously skin-enhancing as well.

I love this idea, not in small part because it acknowledges women’s auto buying power. (Women are responsible for 68 percent of new car purchases.) And as someone who has benefited from other woman-driven car design decisions—like kid-mollifying DVD screens, added storage space, driver’s side visor mirrors, and beaucoup cup holders—I’m all for a skin-enhancing drive. It even accomplishes every busy woman’s favorite time-saver: multitasking. Instead of spending an hour in a facialist’s chair, I could just drive my Fit She’s to a meeting and kill two birds with one stone! 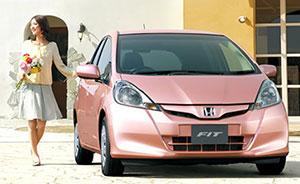 So, here’s what I’m not crazy about when it comes to the Fit She’s—the color.

The car is also offered in brown, black and white, but its flagship model—and the only one you see in its marketing material—is a frosty, coral-pink.

Yes, I know pink can be powerful and I know real men wear pink but pink is also problematic. It’s every princess-obsessed little girl’s favorite color. It’s soft and sweet and infantile. And on a car, especially one named Fit She’s, it’s a man-repeller

That makes it a missed opportunity. I know plenty of men who enjoy extra cup holders and visor mirrors. They would also love a car that helps stave off leathery skin. But I don’t know a single man who would be comfortable driving a pink “for her” car. As a professional woman who’s well beyond her tween years, I don’t think I’d feel comfortable driving it either.

I’m bewildered by this method of catering to women. It ghettoizes us and alienates men. It’s the exact opposite of what we try to do here at Brogan & Partners. We are marketing-to-women experts but we don’t believe in “divide and conquer.” In fact, we know that thinking like women—and knowing how women think—is an important part of reaching both genders. Taking both genders seriously is a must, too. We do. Maybe the 2014 version of Honda’s skin-saving car will try to also.