This is according to a May survey of Brogan Talks to Women, an informal community of female consumers we tap regularly for opinions and insights about marketing and advertising. After posting a blog about electronic or e-cigarette advertising, we wanted to know our panel’s thoughts.

Electronic cigarettes deliver nicotine to the user as a vapor. They are usually battery-operated and come with a replaceable cartridge that contains liquid nicotine. When heated, the liquid in the cartridge turns into a vapor that’s inhaled or “vaped.” They come in assorted flavors, from sophisticated to candy store.

Magazine ads sparked the most recall among respondents (56 percent), followed by digital (39 percent), TV (30 percent) and radio (22 percent). When asked whether the FDA should ban electronic cigarette ads from TV and radio—similar to tobacco ad restrictions—87 percent said “yes.”

The FDA recently initiated formal action toward regulating electronic cigarettes, with a public comment period inviting all interested parties to weigh in. Still, any new regulations or restrictions could take years to implement. Meanwhile, expect manufacturers to become increasingly emboldened as they jockey for market share. And the product will become increasingly socialized.

“E-cigarette companies advertise to a broad TV audience that includes 24 million youth,” said Jennifer Duke, Ph.D., senior research public health analyst and co-author of the study.  “Given the potential harm of e-cigarettes to youth and their potential as a gateway to using cigarettes and other tobacco products, the FDA needs to regulate the positive images of e-cigarettes on television and other venues where youth view advertising and marketing like they do for traditional cigarettes.”

Last month I saw a 20-something vaping at Detroit Metro Airport, clouds swirling around him conspicuously. He looked incredibly proud of himself. But that may have had something to do with the inconspicuous electronic cigarette-branded tote bag leaning against his legs. Street team vapers. Clever blu eCigs. 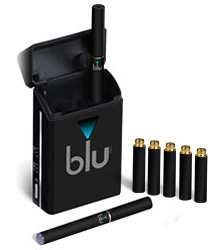