The medium is the message.

It’s as true today as it was in 1964 when Marshall McLuhan coined the term in his book “The Medium is the Massage.” According to McLuhan, the channel in which people consumed media often trumped even the message itself.

Regardless of the quality of message, if deployed across the wrong channel, it can become skewed, misunderstood or lost altogether.

It’s why Red Bull leans heavily on social media and experiences, and lightly on TV. (Red Bull gives you wings is best articulated by extreme feats captured on helmet cams and served via YouTube.) It’s why Trader Joe’s mails its Fearless Flyers rather than emails. (It’s welcomed into your home, tactile and fun, nurturing the personal brand relationship.) It’s why billboards will eternally be part of the fast food media mix. (Billboard = I can smell the fries from my car.)

And it’s why Dr. Ronald Victor, director of Cedars-Sinai Center for Hypertension in Los Angeles, is partnering with barbershops to improve the health of black men.

If Mohammed won’t come to the mountain

Victor recently received an $8.5 million grant from the National Institutes of Health to fund a study testing whether barbershop medicine could significantly lessen hypertension in African-American men.

Largely because of hypertension-related problems, African American men are expected to live to age 69—ten years less than white men. The study will involve getting barbers around the city trained to take their patients’ blood pressure.

Barbershops are a central part of the African American male narrative in the United States, according to blackamericanweb.com. Men may visit the doctor’s office once a year, while they’re likely to visit their barber at least six times as often. 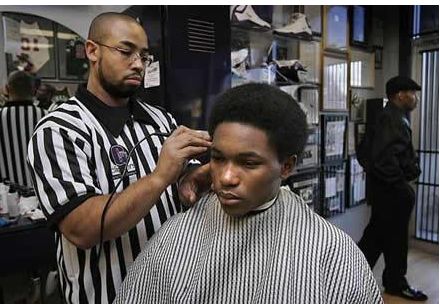 “The idea is, instead of starting out by asking patients, as usual, to come in to the hallowed halls of medicine, we’re bringing medicine to the people who need it,” Victor told NPR.

The barber is the message. He’s respected, trusted and frequented. It’s a personal relationship that can carry a heavy message like preventing heart disease.

In the chaos of media today, nontraditional marketing is fast gaining utility. Brogan & Partners regularly employs nontraditional channels to meet consumers where they are most susceptible to messages. That may be a bar, car, bus stop, laptop, cell phone, home or someplace altogether different. Often it’s a combination thereof. Always, we take the path that leads us to the consumer.

We have to go to Mohammed.

1 thought on “Clever social marketing campaign proves the medium is (still) the message.”