Think back to the third day of your job… nothing out of the ordinary right? At Brogan, my third day consisted of having to get all employees across an imaginary pond filled with alligators with only 3 logs, trying to balance a teeter-totter “ship” with around 20 people, and being hoisted over a 12-foot wall. You’re probably thinking… What kind of third day is that?  I began my journey at Brogan on Monday, and Wednesday our company had the unique opportunity to go Tamarack Adventure & Retreat Center for a team-building experience like no other.

Not knowing many employees at the company yet provided a very interesting – but fun – dynamic for this experience. I was forced out of my comfort zone in the best way possible, and instead of learning people’s titles at the company, I learned their personality traits and the ways they think creatively. Each activity we did provided an underlying meaning related to the interaction of our group and the way our company works together in the office. 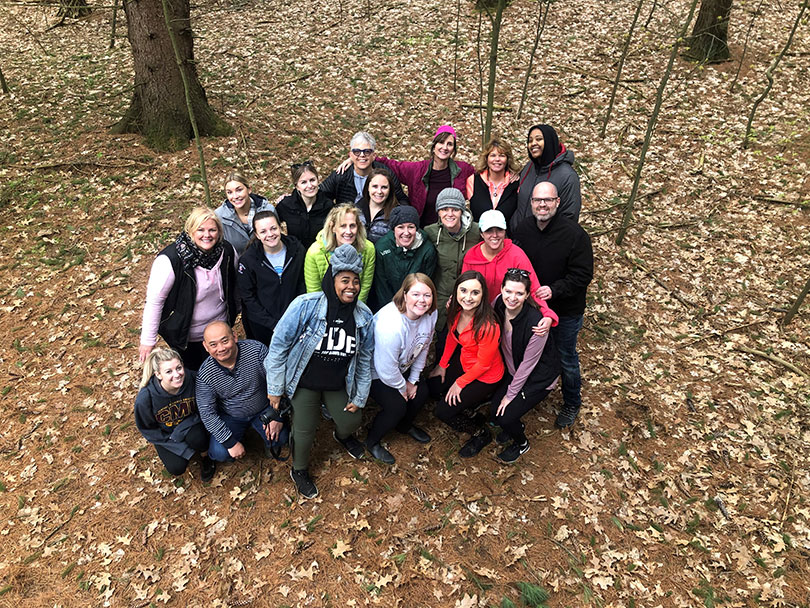 The tasks at Tamarack.

We began by doing a warmup which consisted of dividing into two teams and being given a deck of cards… each with 1 task. Seems simple, however we had a deck of 52 tasks with 12 people, all trying to complete their task at once. The kicker was, you couldn’t tell any of your team members the task you were supposed to be completing.  Some tasks involved being loud and silly, while others you had to strategically get everyone to be completely still and silent for a duration of time.

This exercise made me realize that I was going to be getting extremely comfortable with this group of people over a very short span of time- and that was just the beginning. This warm-up correlated to our roles in the office and trying to accomplish your tasks while additionally helping others. The importance of communication was capitalized in this activity and taught me, as a new employee, how willing all co-workers are to help each other succeed.

Next, we embarked on a journey to transport 20 people across a (pretend) body of water only using 3 logs at a time. This involved some team members to step-up and use strategic thinking to develop solutions to this task. After time after time of tries, attempts, and collaborating- we made it. We faced challenges, such as determining whose strategy we were going to choose to try and giving everyone a voice while we were tightly balancing on wood beams pressed together. Even with these challenges, we overcame them as a group, and I felt as though everyone’s thoughts and ideas were respected – which is exactly how Brogan works. 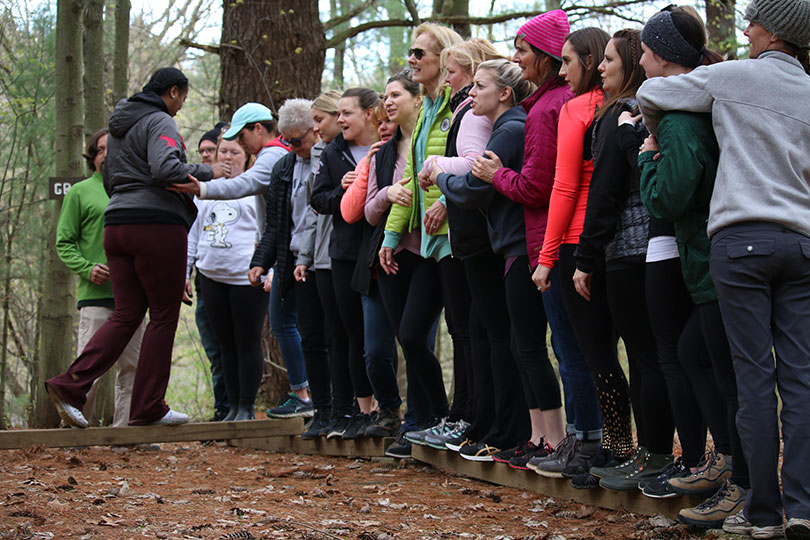 “Does anyone happen to get sea-sick?” Lance, one of the Tamarack guides, asked. Well that’s a weird question as we’re standing in the middle of the woods surrounded by nothing but trees. Actually, there was also a teeter-totter. You know the contraption you used to go on at the park when you were a kid? Picture that – but made into a wooden raft that could hold 20 people. The objective was to get all 20 people on, then balance the teeter-totter in the middle (not leaning to one side or the other) and finally all sing the ABC’s in unison.

Instead of jumping right in, we decided to group-huddle and strategize beforehand. Gabby had the awesome idea of partnering with a “body double” someone with similar stature as you and standing opposite to them on the giant contraption. Once getting everyone on, and standing opposite of your body double, it still would not balance! Instead of getting frustrated, we began to come up with new ideas while practicing patience and communication skills. Someone came up with the idea for everyone to stand completely still and to have 1 person (Lori B.) move to either the right or left based upon the position of the teeter-totter. After many, many times of beginning the ABC’s and hearing the clunk of one side on the ground, we managed to balance it perfectly for the entire duration of the song. Raphael, another Tamarack guide, gave our group accolades for being patient, strategic, and communicative during this exercise.  This praise provided me with a sense of community for these new friends, and really feeling as though everyone was wanted and appreciated within the group.

The last activity of the day was one that the previous employees were able to participate in last year at Tamarack, the daunting 12-foot wall. You never realize the trust instilled in your co-workers until you’re being hoisted over a high wooden wall with the people you work with standing beneath, ready to catch you if you fall. Each person participated whether they were a spotter, someone to help pull you up at the top, or the person physically being lifted over. At this moment, I realized that Brogan isn’t just a company- it’s a family. We communicated, trusted, and worked together like one too.