It’s not every day, a female trailblazer like Sheryl Sandberg comes to town. As a leader at an ad agency that specializes in marketing to women and social media, I was excited to hear the Facebook COO speak to the Detroit advertising community at an Adcraft breakfast today.

She gave a great speech, filled with personal anecdotes, that was appropriately tailored to the Motor City audience and marketing crowd. But my favorite part was what the author of the bestseller, Lean In: Women, Work, and the Will to Lead, said in the Q&A.

As she answered questions about balancing being an entrepreneur, raising a family and what we can do to create more female leaders, it is there she shined. And I was inspired.

Here are the three pieces of leadership advice she would pass on to women. First, acknowledge there are gender differences. Women are often wrongly labeled as whiny, looking to get special treatment or about to sue. Biases exist. For example, she says if a woman and a man’s performance are the same, the man will get more credit. This is because a man usually attributes success to himself, but a woman will attribute it to hard work, team collaboration and a bit of luck. Second, once you accept those differences, you need to adjust. Invite more women to the table to close the leadership gap. Third, encourage girls at a young age. While little boys can be labeled as leaders, little girls can be labeled bossy. She says recognize that those little girls are demonstrating “executive leadership skills.” I especially loved the part of her speech, because it showed her humility. Even though she is so accomplished (went to Harvard for undergrad and MBA, worked as an economist at the World Bank, worked at Google, now COO at Facebook, and sits on the Board of Directors for Walt Disney), she openly admits she struggles with self-confidence at times and recognizes that this is ironic, considering she just wrote a book telling women to believe in themselves.

I came back to the office and Sheryl is everywhere I look now. She just wrote an article on Beyonce for Time. And now I am obsessed googling her appearances like this Ted Talk where she addresses why we have too few women leaders.  Today, Sheryl had the podium in Detroit, but every day she has a much larger one that she is using to inspire other women to lean in and make a difference. In fact, even though she is a few years younger than me, I think I want to be Sheryl Sandberg when I grow up. 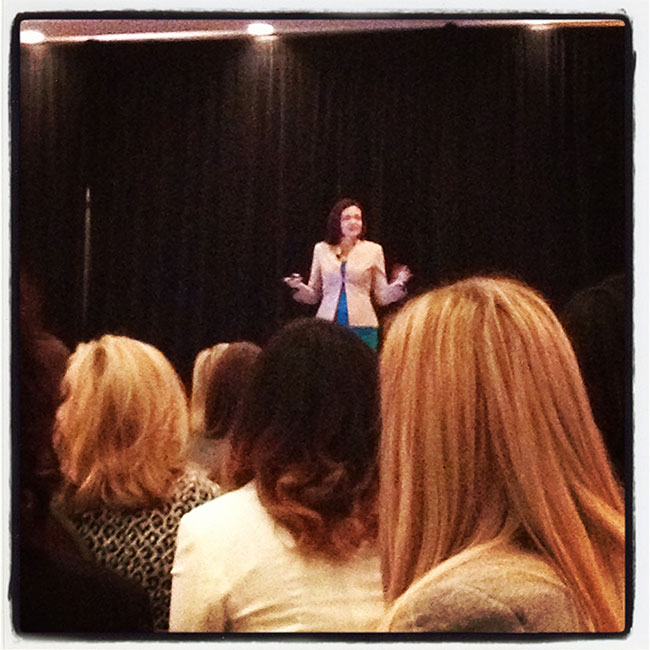 What do you think of Sheryl Sandberg and her ideas about women in the workplace? I’d love to get your insights.