Most women favor childhood immunizations to protect kids from serious diseases like polio, tetanus and measles.

This is according to the latest survey of Brogan Talks to Women (BTTW), an informal community of female consumers we engage regularly for opinions and insights about marketing and advertising. With some 30 years of healthcare marketing experience, Brogan & Partners was naturally curious about the impact social marketing is having on childhood immunizations.

Of the 189 participants—65 percent of whom are moms or guardians—95 percent support childhood vaccinations. The primary reasons cited were to guard against serious disease (93 percent), evidence provided by public health agencies and other experts (59 percent), having been vaccinated as a child with no ill effects (55 percent), a family physician’s recommendation (40 percent) and having vaccinated their kids with no ill effects (35 percent). 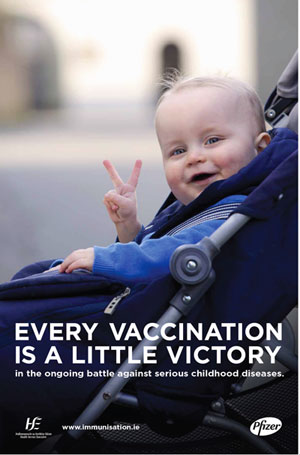 Of the 5 percent who oppose childhood immunizations, the chief concerns noted were potential side effects such as autism (56 percent) and suspicion that immunization against relatively harmless childhood diseases may be responsible for the dramatic increase in autoimmune diseases since mass inoculations were introduced (44 percent).

Since the 1990s, vaccines have become somewhat controversial. Of particular note was a fraudulent article published in 1998 in the medical journal The Lancet.  The researchers suggested a link between the combined measles, mumps and rubella (MMR) vaccine, fueling the anti-childhood vaccine movement. The cause soon migrated from academic publications to mainstream, attracting celebrity spokespeople like actress and mom Jenny McCarthy.

According to the Pediatric Academic Society, childhood vaccinations in the U.S. prevent about 10.5 million cases of infectious illness and 33,000 deaths per year. A vaccine, like any medicine, can cause a reaction. But the risk of a vaccine causing serious harm, or death, is extremely small, according to the Centers for Disease Control and Prevention (CDC).

In fact, immunization is one of the most important things a parent can do for their children’s health, protecting them from 14 serious diseases, according to the CDC. And failure to vaccinate may mean putting children at risk for serious diseases.

“Some posts on Facebook spurred a conversation with my doctor, specifically about the Tdap and keeping current,” said a BTTW respondent when asked about recent information that has influenced her position on childhood immunizations. “Social media has caused me to question many times, especially when seeing opinions from people I know, but it is easy to get inaccurate information.”

Doctors’ offices and clinics were ranked the most reputable sources for information about vaccination, with 89 percent of respondents, followed by health and parenting magazines/books (32 percent), Internet (19 percent), friends and family (13 percent) and television (5 percent).

“I trust my children’s pediatrician believes what she says and I believe Internet sources such as Natural News is reporting the truth too,” said a BTTW respondent. “It is challenging to reconcile the varying opinions and make the decision that I feel is best for my children.”

Expect the CDC to continue to be a significant part of the narrative. Overall, the CDC spends between $8 million and $12 million each year on a wide range of vaccination messages focused on topics from childhood inoculations to flu shots for the elderly. In addition to traditional media, the agency employs an arsenal of earned, owned and paid nontraditional channels to encourage vaccination. The CDC even has an app for physicians to stay on schedule.

Why the big media spend? Because the CDC and other world health organizations are concerned that controversy over childhood immunization has sparked an increase in preventable diseases.