Today is a very tragic day in the aftermath of the late night shooting in Aurora, Colorado that left many victims in its wake. This type of senseless violence in such a public place like a movie theater is unfathomable and deeply concerning.

I first learned about the Aurora shooting on Twitter. Millions of people took to the social media site, including witnesses and victims, to send updates and condolences. It really is remarkable how influential social media can be during happy and sad times. We understand that Twitter, and social media in general, is a place for fast communication and where you can join conversations happening all over the world; which is why so many companies have a twitter presence and also why it’s so easy for companies to make detrimental mistakes.

Today the twitter handle @celebboutique, an online fashion company based outside of the U.S. tweeted the below to their 42k+ followers:

I was shocked and saddened when I saw this, as was the rest of the Twitter community. About 45 minutes later they tweeted this multiple, tweet apology: 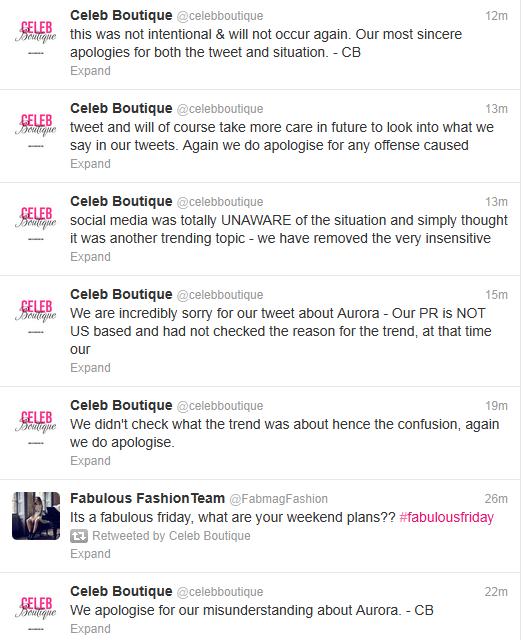 Although Celeb Boutique apologized, is something like this easily forgotten or forgiven? A mistake like this, which could have been so easily avoided, may severely hurt their brand image and sales. This is why it is so important to have an effective Twitter strategy in place that outlines content being posted and necessary steps to take before posting, like checking facts and trending topics.

Celeb Boutique isn’t the first to make a Twitter blunder like this, for example the #notguilty hashtag mistake that Entenmann’s made and the insensitive tweet from Kenneth Cole.

Do you think Twitter mistakes like this can permanently damage a brand? Or is there room for forgiveness in this social-sphere?