So, what exactly classifies as binge watching? According to Netflix, it’s watching two to six episodes of the same show in one sitting, and nine of 10 people admit they’ve done it. What’s more, 73 percent say they have positive feelings about it.

9 out of 10 people admit to binge watching.

Why has binge watching become so popular, you ask? Reasons for binge watching vary, but Netflix found two in three people say there’s simply too much good TV to watch. (No argument there, right?)

Where are people binge watching?

About two in five American households now subscribe to a video streaming service, and people in those households spend a significant amount of time in front of their screens. Some households have even chosen to dive into streaming completely—becoming “broadband only” homes. It’s estimated that 2.6 million don’t subscribe to cable at all, but rely solely on streaming.

Here’s where users are tuning in to TV:

Streaming here, streaming there, streaming everywhere. Binge watching is becoming consistent across all generations, but Millennials tend to be leading the way. They’re continuously consuming TV shows and videos on their time, not the networks’. And as a result, they’re almost two times more likely than other generations to watch something later than to watch it live. 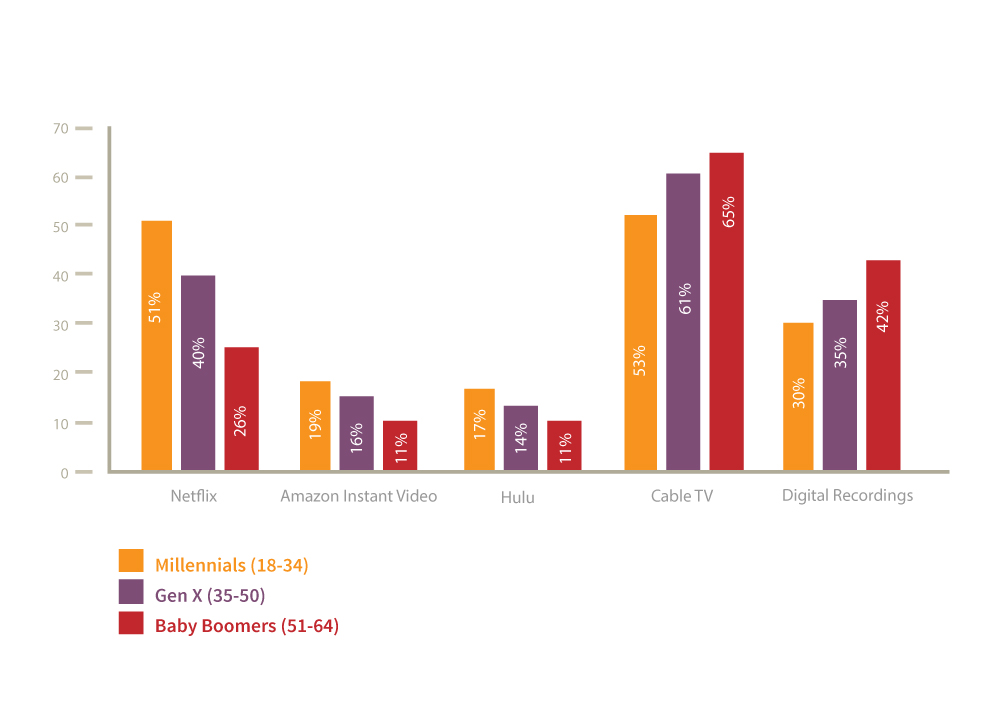 More than half of all Netflix subscribers are Millennials.

What are people binge watching?

Drama? Check. Fifty-four percent of people in a recent survey say they love powering through those hour-long episodes, especially women.

Comedy? Another check. They’re usually shorter, which makes it easier to watch more episodes. And when it comes to chuckles, Millennials are on board. Twenty percent will binge watch for belly laughs, and 57 percent will go to Netflix first to find them, especially men.

Thus, it comes as no surprise that “Breaking Bad,” “Dexter,” “Game of Thrones,” “The Walking Dead” and “Orange is the New Black” are among the top five shows recommended to binge watchers. (Although if you ask me, I’d say: “One Tree Hill,” “Friends,” “The Big Bang Theory,” “Boy Meets World” and “Parenthood.”)

But, what does come as a surprise is that Netflix now knows precisely which episode makes viewers addicted to a TV series… and it’s usually not the pilot. Maybe that’s why the idea of releasing an entire series at one time has become their go to. For Netflix, the thought of getting people to come back week after week is hard. But the idea of getting them hooked on an entire series—so much so that they watch it in its entirety in one sitting—that’s easy. 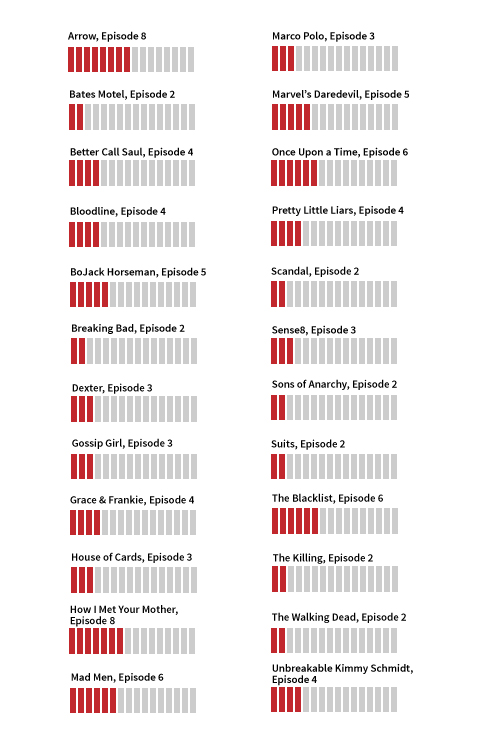 How can marketers connect?

As audiences continue to shift away from traditional viewing methods, how can marketers reach them in meaningful ways? And to that, we ask, why not meet them where they are?

What’s your favorite show to binge watch? Tell us in the comments below, and then calculate the amount of time you’ve spent watching it.